The Rio Grande Southern Hotel and Restaurant was built in 1893 and is the oldest building in Dolores, Colorado. It was the first hotel in town and for many years was the only eating house between Durango and Telluride. It is located a short distance west off of Highway 145 on S. 5th St., in the vicinity of the Galloping Goose display and museum. 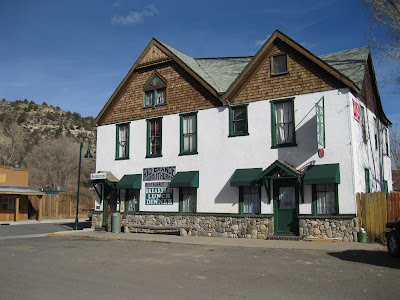 The Dolores area is a gateway for both canyon hikes and mountain hikes. Heading north along Highway 145 the Bear Creek and Priest Gulch trails are about 25 miles away. The west fork of the Dolores River also has interesting hikes at Fish Creek and the Geyser Springs among others.

Above Dolores is the Boggy Draw Trail System. The small but excellent Anasazi Heritage Center museum is a short distance away and it acts as the Visitor Center for the Canyons of the Ancients National Monument. 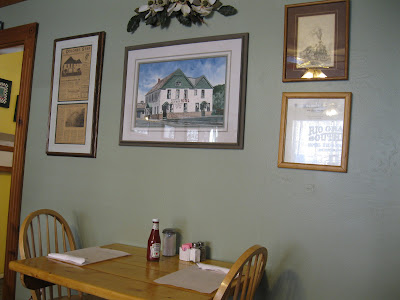 The lunch menu at the Rio Grande Southern has a strong German flavor due to long time Dolores area chef Rita Bergestrom. On the shelf above the table where I ate there are copies of her “A Taste of Old Germany” cookbook for sale. I had a tasty Schnitzel sandwich with a side dish of German potato salad.

I had to look up what exactly Schnitzel is and I found that it is a breaded boneless cutlet that is thinned with a hammer and fried. Schnitzel seems to be a style. The meat used can vary. I think my sandwich was pork but other meats can be used. The term Weiner Schnitzel is specific to veal.   There was a layer of lettuce and tomato with mayonnaise on the bottom and a layer of ham on top.

Posted by Todd Lochmoeller at 11:05 AM No comments: 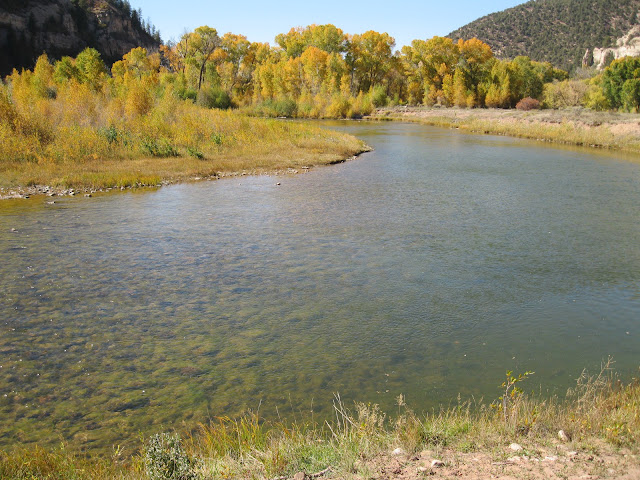 I parked at the Ferris Canyon Campground which is open in the off season and is about 7 miles east along the Lone Dome Forest Road. Salter Canyon is about 0.4 miles further east. From the campground you can hike along the gravel Forest Road or along the banks of the Dolores River. There is a fence along the road with an easy gate near the mouth of Salter Canyon. 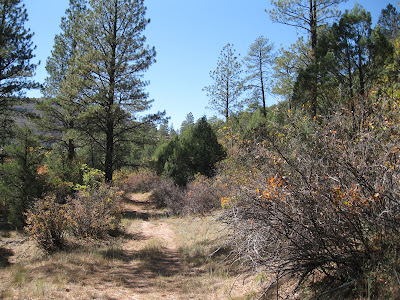 There is a wide creek bed with a bridge at the mouth of Salter Canyon. On the west side there is an unmarked trail that follows up the canyon. It looks like this trail was once a road but is now abandoned. The lower canyon has Ponderosa Pines and with thickets of Gambel Oak. There are also Rocky Mountain Junipers and Narrowleaf Cottonwoods along the creek. 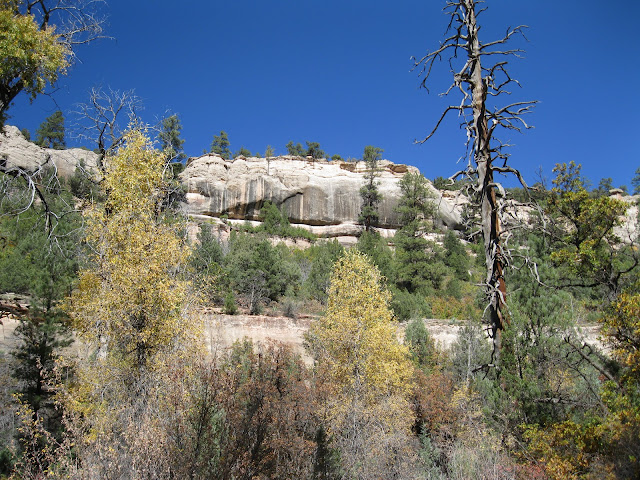 The west side of the canyon has steep sandstone walls. I scanned the canyon walls for signs of ruins sites but didn't notice anything. The thickets of oak made it difficult to approach the canyon walls. 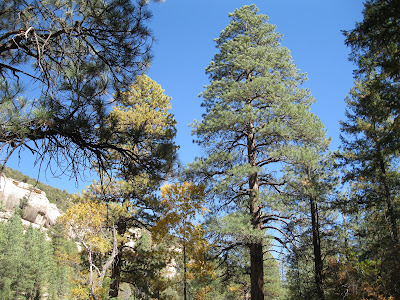 The trail was easy to follow for about 0:30 minutes or about 1 mile and then the forest became very thick and the trail overgrown. I saw one very large Ponderosa Pine near the upper end of my hike. 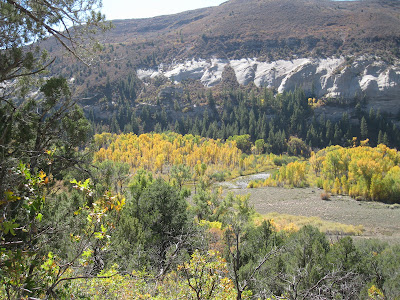 My hike in Salter Canyon was for about 1:00 hour with some additional time looking along the Dolores River. My total hike was for about 2:30 hours on a 70 F degree early October day. Other points of interest a little further east in this area include the old cabins that were the Lone Dome Ranger Station in 1912. There are also some old ranching structures in the same area.

Posted by Todd Lochmoeller at 9:16 AM No comments:


The House Creek Recreation Complex is a 65 site campground and 4 lane boat ramp site on the McPhee Reservoir of the Dolores River. This facility is in the San Juan National Forest in southwest Colorado. It is located 13 miles northwest of the town of Dolores using Forest Road 526 with a left turn on Forest Road 528. 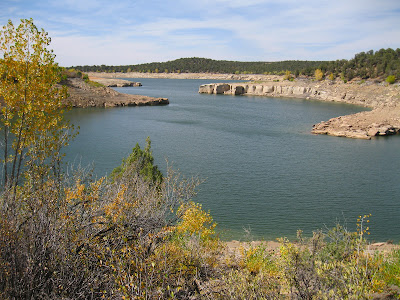 House Creek is one of the flooded tributaries of the Dolores River about 5 miles upstream of the McPhee Dam. Before arriving at the Recreation Complex, there are 3 pull over bank fishing sites along House Creek with short trails leading toward the water. 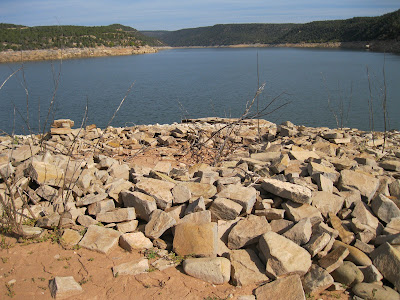 There aren't any official hiking trails in the House Creek Complex, but there is room to walk along the shore and the park roads. In the fall, the McPhee Reservoir level may be low enough to expose Ancestral Pueblo ruins sites that were flooded by the reservoir project. 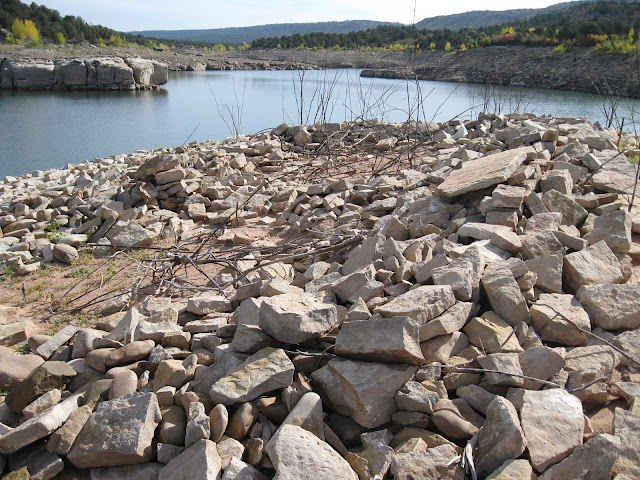 It looks like there is a ruins site on the cliffs near the mouth of the flooded House Creek. This site isn't very far below the high water line. I saw one piece of pottery associated with this circular pile of rubble. 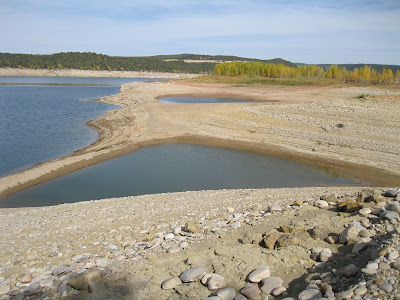 Part of the exposed lake bed is easy to walk on and other parts are steep but with ledges. On the south end of the Complex there is a section of forest above the high water line. 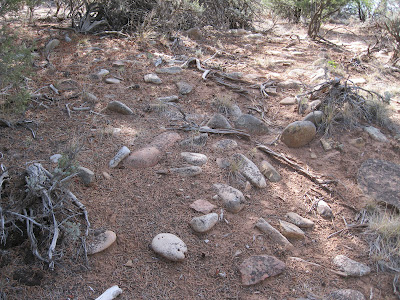 In this forested area that would have had a high view of the Dolores River there is a vague rubble pile that could be a ruins site. 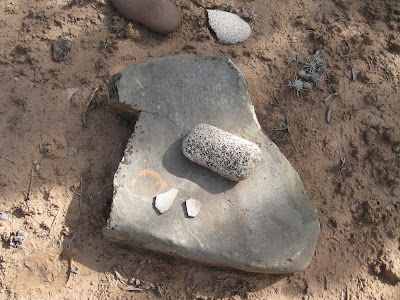 Associated with the rubble pile were several pottery shards and what looked like a set of grinding stones. There are some unofficial trails leading to this forest area from the group site at the south end of the complex. I continued a short distance further south to a flooded side canyon and then returned along the complex roadways. My total walk around the House Creek area took 2:00 hours on an early October day.

Posted by Todd Lochmoeller at 6:34 PM No comments:


The Haflin Creek Trail is a 5 mile route that climbs from the Animas River Valley floor up to Missionary Ridge, north of Durango in southwest Colorado. The trailhead is about 7 miles north of Durango along Highway 550, then east 1 mile on Trimble Lane and south 1.2 miles on County Road 250 to a gravel turn toward a Forest Service Work Center. I didn't notice a sign for the trail along the road. The Dalton Ranch Golf Course is in this area. 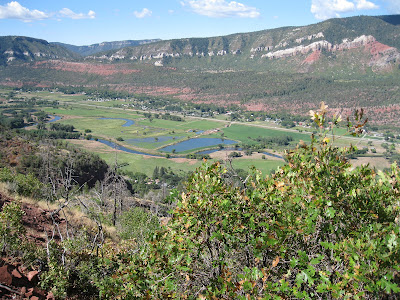 The first segment of trail climbs steeply with back and forth switchbacks above the trailhead area. There are increasingly higher views above the Animas River and southwest views toward Animas Mountain and the Hidden Valley area. The trailhead elevation is 6600 feet and there is 1000 feet of climbing before the trail starts to level off. 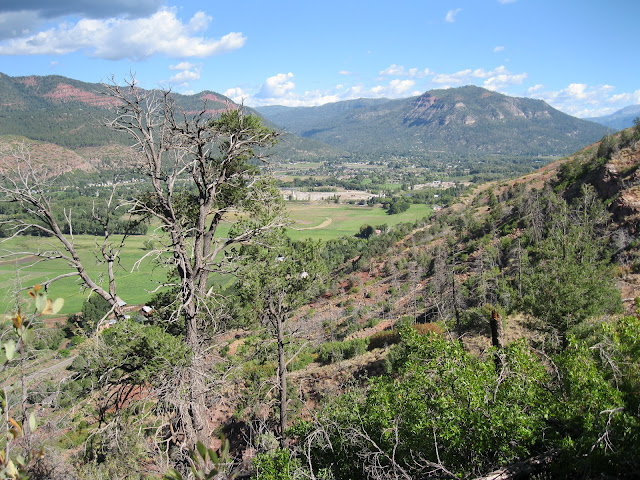 There are also good views to the north. The Haflin Creek Trail features a rich variety of trees. Gambel Oaks, Pinon Pines, Utah and Rocky Mountain Junipers, and Ponderosa Pines are all in view along the climbing segment. Further on are Douglas Firs and Aspens. 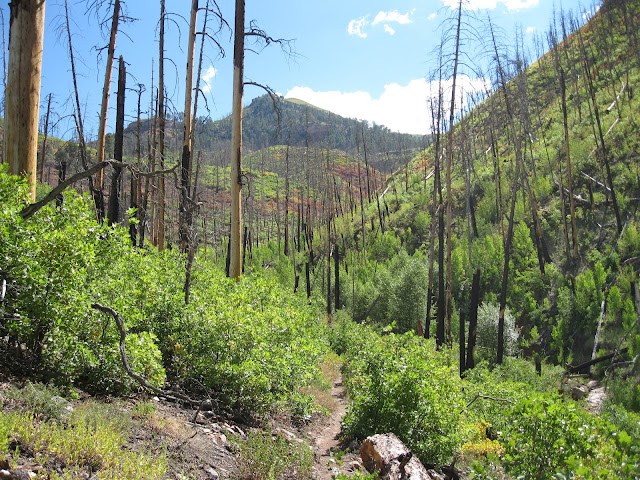 Ten years later, there are Gambel Oaks returning, but the tall pines and firs are scorched reminders. Baldy Mountain at about 9700 feet is the high point ahead. 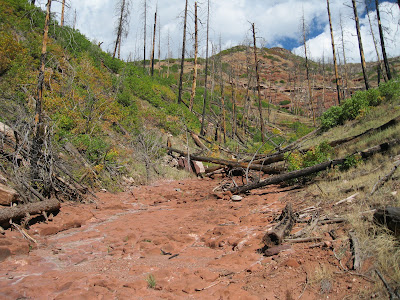 The route continues to climb, but more gradually. There are two dry creek crossings and Haflin Creek has only a trickle of water. In early September, some fall color is starting to appear. 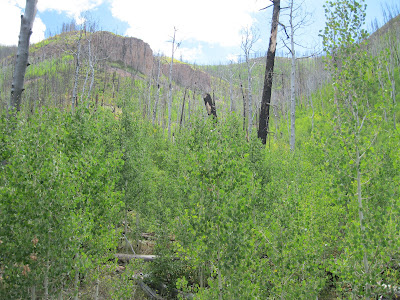 Further up the trail, young Aspens are growing. I turned around after 2:15 hours and about 4 miles at about 8500 feet elevation. There is a trail junction with the Missionary Ridge Trail about 1 mile further and 1100 feet higher. 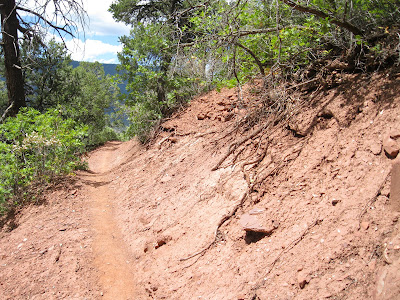 My return hike took 1:45 hours for a total hike of 4:00 hours for about 8 miles. It was an 82 F degree early September day and I carried 3 liters of water. I saw 14 other hikers and 6 dogs during my hike.


There is a marked turnoff for the Dolores Canyon Overlook on the south side of Dove Creek, along Highway 491 in southwest Colorado. From the turnoff it is 10.4 miles to the Overlook. There are BLM signs marking the way. 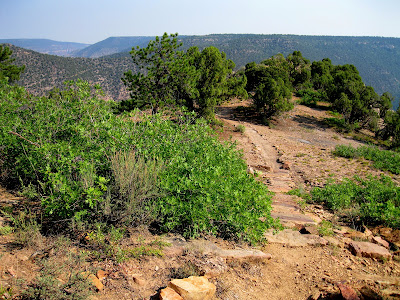 The Overlook is on a point of land high above an entrenched meander of the Dolores River downstream from the Bradfield Bridge area of the Lower Dolores River. There is a short trail out to a view point with picnic tables along the way. The Dolores River is visible on both the east and west sides of the view area. The elevation at the Overlook is about 8000 feet and the river is at about 6200 feet. 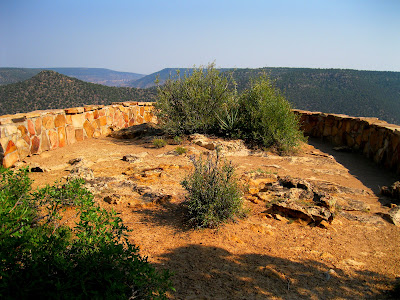 At the end of the trail there is a constructed view point. Directly north, the point of land visible is known as Mountain Sheep Point. Below, the Dolores River makes a sharp turn from north to south. 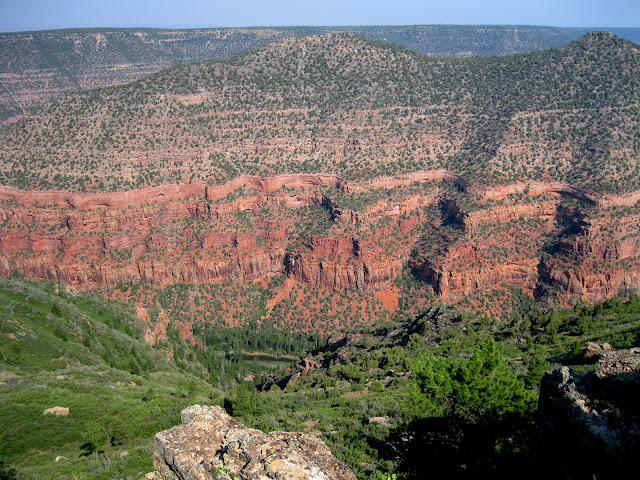 Flowing south for a short distance, it makes another sharp turn back to the north around Mountain Sheep Point. Below the south tip of Mountain Sheep Point, the access road from Dove Creek arrives at the canyon bottom where rafters can access the river and hikers and others can follow a rough road downstream for at least 12 miles. 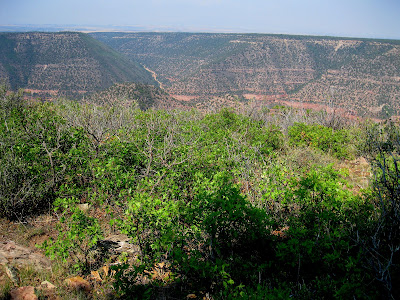 There isn't an official trail along the canyon rims, but the terrain is open enough to allow some hiking. There may be the remains of an old road along the rim that cows now use. I walked for about 0:30 minutes south along the west rim. The road that descends into the Dolores Canyon to the river access
is visible across the canyon. 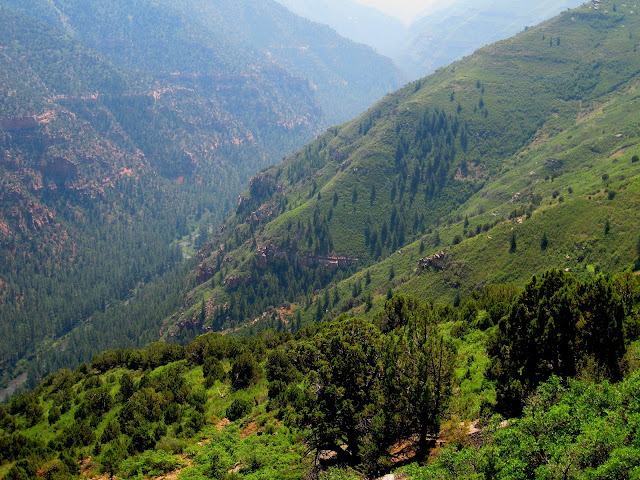 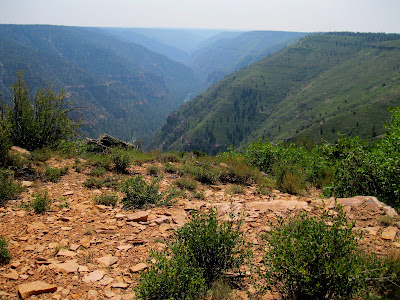 I thought these views and the terrain were similar to the Black Canyon of the Gunnison National Park near Montrose, Colorado. But despite the spectacular views, the Dolores Canyon Overlook is only an obscure site that is lightly visited.

On the road near the overlook I saw a Blue Grouse and I think I saw two coyotes sprinting across the road. There was a third animal about the same size as the coyotes but with a more lumbering gate. It wasn't large enough to be an adult bear, but may have been a young one. I just got a brief glimpse.  I spent 2:00 hours for about 3 miles of walking on my visit on a 75 F degree mid August day.

Posted by Todd Lochmoeller at 6:15 AM No comments:

More Hikes in the Four Corners

Todd Lochmoeller
Traveler has been living in the Four Corners area since 1991, much of the time on the Navajo Reservation near the Canyon de Chelly National Monument in northeast Arizona. My goal is to present highlights of the wonderful trails, mountains and canyons of the area, with a little of the environemntal and cultural overlays. If you are in the area, be sure to visit the National Parks: Mesa Verde, Canyonlands, Arches, Canyons of the Ancients, Hovenweep, Petrified Forest, Chaco Canyon, Natural Bridges, and the National Forests, San Juan and Manti-La Sal. And don't forget the scenic drives in the Navajo Nation.